Voidsuck This!: Charles Carreon’s Review of Riding The Torch by Norman Spinrad

Voidsuck This!: Charles Carreon’s Review of Riding The Torch by Norman Spinrad 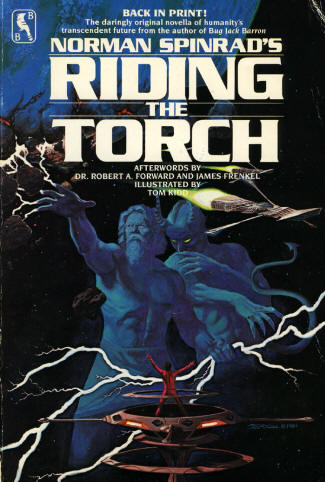 In this novelette, published some years back, the august chronicler of imaginary odysseys was hammering away on his piece of malleable mindstuff, refining the themes that became more fully fleshed out in The Void Captain’s Tale and Child of Fortune.

As the story begins the hero, Jofe, is put out. A skillfully-timed announcement from the Pilots have upstaged the premier of his latest production, “The Wandering Dutchman,” a direct-to-the-senses media extravaganza that is sure to wow his fellow shipmates on the torchship Brigadoon. Never mind that the Pilots claim to be hot on the tail of another earth-like planet. These false alarms have gotten to be a bore, and he tells the leader of the Pilot’s union just that, getting the better of him in a jeering match in front of the ship’s high society.

The Pilots are an austere cult of “voidsuckers” who man the diffuse outer edge of the torchship convoy, scouring the galaxy for a replacement for earth. On his way out, the Pilot tells Jofe that he ought to come out and see what it’s like to face the interstellar void, away from the entertainments of the ship lifestyle, with its psychic Internet of sensory-jaunting and endless stimulation. Jofe’s just pissed enough to take the challenge, thus condemning himself to six months in deep space with a small crew of voidsuckers, without psychic email. But it’s a publicity bonanza, and he tells everyone he’s gonna make a movie out there.

No sooner is he out there than he figures out there’s something weird here. He knows they’ve got a secret, but they won’t share it with him until he sucks void. He soon finds out what that’s about. Every now and then one of the crew gets “the call” and they go hang out in a small ship way out beyond where they can't even see the light of their little scout ship. Hang out there for three days or so and suck void. So Jofe wants to wire one of ‘em up and get their psychic experience on tape, but they all say no. Finally, he decides he’ll go out and suck void, and wire himself to get the movie. His voidsucker friends are all like, “You’ve heard the call!” And he’s like “Whatever – you guys just wouldn’t help me out, so I have to do it.” And they’re all “It comes to everyone in a different way.” Then he’s off to suck void.

He rattles around in empty space in his tin can for many hours, and it’s a heavy trip, it seems like forever, it seems like stillness and clarity, then it gets jumbled up again, and then there’s more peace and clarity, and then he comes back. So he’s like, “Okay, cool. I sucked void. What did you call me out here to tell me?” And the head Pilot explains that they’ve been lying for 200 years to humanity. They know there’s no habitable planets. Apparently we nuked and poisoned the only fucking one in the whole galaxy. They pretend to know less than they do. They suck void because it’s the only thing that calms them down. They’re void junkies. And they want him to make a new senso so great, like The Wandering Dutchman but better, that will help humanity get a grip on the fact that they’re just out there in space forever and unlikely to enjoy the basic planetary benefits of free air, gravity, fertile soil and nontoxic precipitation ever again.

So he goes home and tries to make his senso, but he’s just using tricks. The public is starting to clamor for the big voidsucker epic, so he locks himself up in his studio and turns on the tape of his voidsucking experience, puts it on an endless loop, leaving himself the power to come out of it whenever he wants. He drops into the loop, and it goes on and on and on, and he realizes after an eternity that isn’t moving anywhere at all, that this is really painful, a poke in the eye with a sharp stick, and he asks himself, “Why am I doing this to myself?” Then he realizes that he’s just sitting in his room playing a tape, so he turns it off. Then gets up and creates this ass-kicking senso that tells everyone that, what the hell, we’re riding the Torch, we’re humanity, the lonely badass exiles of the one and only Eden, using the power of the stars to make our worlds one atom at a time. We’ll fucking kickass forever, and the void can fucking suck itself. And planets? Planets? We don’t need no stinking planets!
Top
Post Reply
1 post • Page 1 of 1