Lhasa rules don't apply here. Click this link, and catch a breath of the fresh air of psychic freedom from Buddhist authority. If you haven't tried breathing outside the sterile domain of orthodoxy, step inside. It'll clear your head and free your mind.
Post Reply
1 post • Page 1 of 1 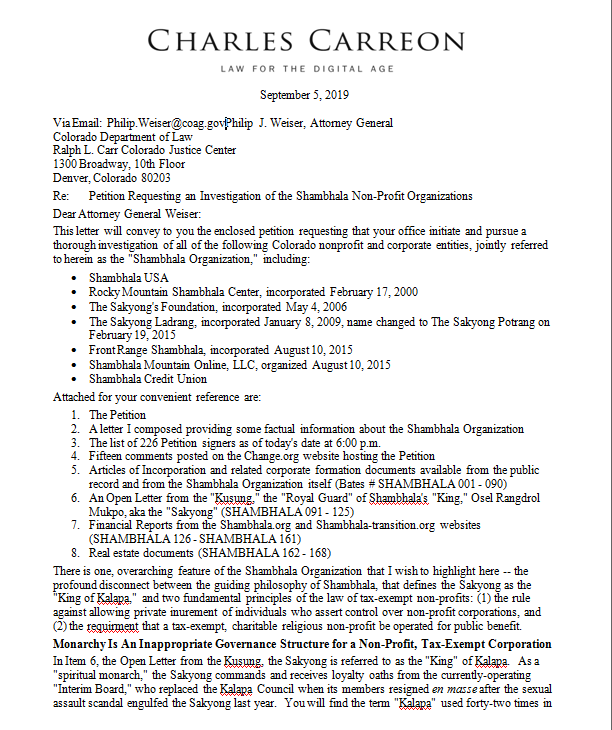 Re: Petition Requesting an Investigation of the Shambhala Non-Profit Organizations

This letter will convey to you the enclosed petition requesting that your office initiate and pursue a thorough investigation of all of the following Colorado nonprofit and corporate entities, jointly referred to herein as the "Shambhala Organization," including:

Attached for your convenient reference are:
There is one overarching feature of the Shambhala Organization that I wish to highlight here -- the profound disconnect between the guiding philosophy of Shambhala, that defines the Sakyong as the "King of Kalapa," and two fundamental principles of the law of tax-exempt non-profits: (1) the rule against allowing private inurement of individuals who assert control over non-profit corporations, and (2) the requirement that a tax-exempt, charitable religious non-profit be operated for public benefit.

Monarchy Is An Inappropriate Governance Structure for a Non-Profit, Tax-Exempt Corporation

In Item 6, the Open Letter from the Kusung, the Sakyong is referred to as the "King" of Kalapa. As a "spiritual monarch," the Sakyong commands and receives loyalty oaths from the currently-operating "Interim Board," who replaced the Kalapa Council when its members resigned en masse after the sexual assault scandal engulfed the Sakyong last year. You will find the term "Kalapa" used forty-two times in the enclosed internal documents of Shambhala. The Sakyong resides in the "Kalapa Court," and his Court functionaries were dubbed the "Kalapa Council."

Titles of Nobility, Abolished by the Constitution, Should Not be Publicly Subsidized

Designating the Director of a 501(c)(3) non-profit corporation a King runs afoul of Article I, Section 9, Clause 8 of the United States Constitution, that provides "No Title of Nobility shall be granted by the United States." By approving the non-profit, tax-exempt status of the Shambhala Organizations that present the Sakyong as a divine monarch, the United States government has in fact been enviegled into financially supporting a monarchical institution with a public subsidy.

As a review of the Articles of the various Shambhala corporations shows, all of these corporations are controlled by the Sakyong Potrang, that has one director, who although unnamed, could only be the Sakyong. The current Interim Board has signed a Loyalty Oath to the Sakyong[1] that entirely undermines any vestige of "independent Board oversight," and establishes a form of corporate governance that makes private inurement not only possible, but indeed, the order of the day.

The Shambhala Organization's monarchical structure flies in the face of the notion that a non-profit organization enjoying tax-exempt status must provide public benefit. A non-profit organization cannot be a "Court," and its Board members cannot be courtiers. These structures are specifically intended to centralize authority and wealth in a single individual -- the King -- and to justify unlimited expenditures of funds gathered under the rubric of charitable, religious activity to pay for a lavish display expressly modeled after the courtly displays of European monarchs.[2] A monarchical structure, that reposes all control of riches and power in one man cannot, by definition, be operating for the public benefit. The "exemption from federal income tax is intended to encourage the provision of services that are deemed socially beneficial."[3] "An organization that seeks to obtain [or maintain] tax exempt status, therefore, bears the burden of proving that it satisfies all the requirements of the exemption statute involved."[4] The Shambahala Organization cannot carry this burden in its current configuration.

Proposed Remedies Should Include Abandonment of the Monarchical Structure

I would therefore recommend that the Shambhala Organizations be required to abandon the entire monarchical structure and the deification of the Sakyong as the organization's "God-King," as a condition of maintaining its non-profit status. Additionally, they should be required to disclose at least five years of financial records to your office and the public, and to get current on all Form 990 filings, including those corporations currently dodging the filing requirements by claiming "church status" that is vitiated by asset commingling and interlocking control mechanisms.

Your investigation may of course bring to light other inappropriate aspects of the Shambhala Organization's way of conducting its affairs, and require additional changes to its system of corporate governance, changes that can be enforced through continuing oversight and potential judicial action. Additionally, my own study of the Shambhala Organization is continuing, and I will continue to monitor its activities as they come to light, and intend to send you a further letter summarizing additional facts and legal authorities supporting this request for investigation and remedial action.

In conclusion, to make clear my motivation in submitting these materials to you, I hereby certify that I initiated the Petition to advise you of an urgent situation that might not otherwise garner your investigative attention. My interest in this matter is not motivated by any private grievance, nor do I represent any client with an interest adverse to the Shambhala Organization or any of its principals. I will follow up with Mr. Rauch so that I may report to the Petitioners regarding the effect of their Petition. Thank you for your attention to this matter.

[2] "[O]n the home front, the nearest Western model on which to base a Shambhala household seemed to be the courts of European monarchs, with a touch of Asia thrown in the mix; I suppose that if he wanted a more homegrown approach, Rinpoche could have suggested organizing his life around the model of the American White House, which is really another take on a European court, but he was not attracted to this bastion of democracy as a role model for himself or his students." Diana J. Mukpo and Carolyn Rose Gimian, Dragon Thunder, My Life With Chogyam Trungpa, p. 216 (Shambhala 2006) (emphasis added).

Return to “We're Not in Lhasa Anymore”