From Haight Ashbury to Silk Road, I Always Miss the Fun!
by Charles Carreon
October 6, 2013 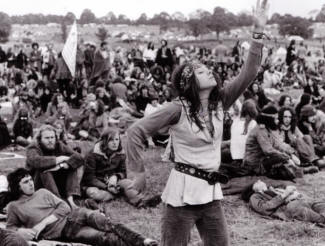 I got to Haight Ashbury in 1968. The Summer of Love was 1967. I couldn’t help it. I rushed. I was only twelve when I ran away, but run I did, to where the sign flashing “LSD” could be seen, irrigating the brains of a new generation that had no need of footwear. The LSD was still flowing, for those who wanted it, and although speed was said to have killed the scene already, among the embers I found some glowing coals, enough to give light to my own brain. So I caught the flight I’d been aiming for, and even went to a Grateful Dead show at Speedway Meadows, where I passed out after a paper cupful of Red Mountain. The littlest hippie slept through his first acid rock concert.

But I’d missed it. The scene. The explosion of radiant color and psychedelic design that transformed art, style, clothing and architecture had already pulsed out of the Haight like a plasma wave from a supernova, blasting the entire country with a jolt of creativity. There were only remnants of the blast left visible in empty storefonts where headshops and utopia-incubators had once exhibited their mad splendor. It felt like a carnival had come through town and stolen the kids, leaving behind dazed hangers-on who were still trying to figure out where everyone had teleported.

When I got married -- that I did early, as soon as I turned eighteen. I liked the girl I was with at the time, and couldn’t see any reason why I would be changing my mind about her anytime soon, so I proposed to her as we were standing on the side of a road, hitchhiking. I was right about her. She was crazy about me, and I would never have to wonder if somebody loved me again for the rest of my life. Nice to have that taken care of, since being unloved is the first sin, in my book.

We went to India, like all good hippies thirsting for Enlightenment in those days, flying Icelandic Air for $225 round trip to Luxembourg, whence we hitched to Munich, whence we trained to Istanbul with a short and bureaucratically perilous detour through Yugoslavia, a country for which we did not have a visa, but where we found ourselves due to an embarkation error somewhere along the train line. Fortunately, Yugoslavian police had sense of humanity, problem did not blossom into international incident, and we made it to Istanbul without even paying bribe. Also had some good meat strudel in the city of Mnic.

People were used to us, too. They were like bored of us. Oh, hippies. You guys have no money. You want drugs. Your women are young and beautiful, they dress like whores, but you won’t sell them to us. What are you good for? By the time we got to India, it was like. Oh, hippies. You want religion. What does religion mean to you? It is one more trinket? Our religion is precious to us. Go away. We already sent the type of guru you are looking for to California. Go there. That is where you will find him.

We also got to the land late. As in, “I gotta get back to the land and set my soul free,” the promised land of Woodstock as prophesied by Joni Mitchell in her song of that name. As Joni observed, “by the time we got to Woodstock, we were half a million strong,” and thus there were plenty of older hippies ahead of us, and the communes were kinda booked up when my wife and I showed up, all wide-eyed and innocent. Instead of utopias, what we got were little feudopias where everyone swore allegiance to the land, and those who owned the land got the best mates and sleeping quarters. Psychologically, these communities conceived of themselves as Camelots, but came across more as Peyton Place with beads and feathers. There was usually some kind of feud going on over some point of procedure or access to amenities or failed gardening enterprise.

I even got to the law late. Like how could that be? Are there seasons in the law? Yes. There was a pretty cool time in the law of the United States, about ten years before I got to law school. The Warren Court criminal procedure decisions hadn’t yet been rendered nullities by decades of reactionary retrenchment. Tort law had been expanded to give meaningful remedies to people injured by defective products. Consumer law was generally understood to be intended to actually benefit consumers. Contracts had to be read and signed to be enforceable. An atmosphere of common sense emanates from many of the judicial decisions of the late sixties and through the seventies.

By the time I got into the courts and offices where law practice happens, the impact of the Reagan judicial appointments, the rhetoric of tort reform, the anti-trial-lawyer sentiment, and the law-and-economics movement had created a strong counterforce that was undermining all that commendable progress that I’d learned about in law school. Now, twenty-six years later, only a hollowed-out husk remains of the robust structure of rights and protections that made citizenship meaningful. An unread clickwrap agreement is as enforceable as the most solemnly-signed agreement. There’s no time to read, and much need for the protection contracts give the corporate lucre-lords. Indeed, most legislation is passed without ever having been read by the Congress and the state legislatures, the product of lobbyist-draftsmen who write the law the corporations pay to see go on the books. To go to the courts with idealism in your heart is to ally your fortunes with those whose failure is pre-ordained. If you wish to rise, serve the powerful without scruple.

I arrived late to the dot-com era, in 1999, when almost all of the IPOs had already blasted off. I got on the first dot-com that would have me: Sex.Com. Thereafter, for years I was believed to be either counting my money or marooned in orbit with scantily-attired shipmates. Neither was true. I wrote all about it in my book The Sex.Com Chronicles, a tale of legal intrigue that my agent dubbed “the best book I couldn’t sell.”

Now I have totally missed out on Silk Road and its kingpin, the Dread Pirate Roberts. I knew the scene was going down because a client put me onto Bitcoin, and Silk Road was, as all the world now knows, Bitcoin-powered. I am inured to having my entire life examined in minute detail, and far too technologically lazy to bother wrapping my nonexistent privacy in a cloak of TOR. Hell, I can barely stand going to Second Life. I could never be bothered with Silk Road.

I have missed out on most of the big drug markets in my life, but I did once buy some putative mescaline at Cortez Park, an open-air psychedelic supermarket in the far northern reaches of the Phoenix suburbs. It was exhilarating seeing all that felonious activity right at hand. We came in a carload, and got our caps of mesc about as fast as we'd get tacos at Jack in the Box. Then we plunged into the safety of the dark desert with a reliable driver who wasn’t tripping. He was schizophrenic, though, so we all felt comfortable together and enjoyed a walk deep into the desert, following the power lines. You can’t get lost as long as you remember what direction you were going. Probably anyone these days would tell you what we did was dangerous – people get lost in the desert and die all the time, in broad daylight, much less tripping in the dark. But danger was the last thing on our minds.

Nowadays, people buy drugs without leaving their computer. They get high in the comfort of their dorm rooms. They might get overheated at a rave, but probably won’t be found wandering through the wilderness tripping at night. But the online wilderness poses a serious threat to their safety and health. Although DPR isn’t being depicted as a victim of FBI entrapment, he is. Because it’s always easier to engineer guilt than to investigate crime, the FBI twice sent provocateurs to ensnare DPR with blackmail threats. DPR, trapped inside his own mind, fell into the role of criminal mastermind. At that point, he was playing a game against a far greater criminal mastermind – Hoover’s Bureau. They cooked him with exquisite care, and he was thoroughly roasted. It is a tragic story, with only one real victim – DPR himself.

At this point, it’s obvious someone should have been selling collectibles – I keep seeing a Physical Bitcoin with a silk-laden camel on it, with a palm and a pyramid in the background. On the other side, what else but the classic image of the original Dread Pirate Roberts? When you think about it, it’s not too late to strike a commemorative Physical Bitcoin to honor what was once four percent of the Bitcoin economy. Put together a crew to push that on Kickstarter, eh?

Of course no one will be doing that. This is one cool, high-tech thing that people do not want to be associated with. The early adopters who had Bitcoins confiscated in the seizure of Silk Road are wondering if they’re going to get some undesired attention from law enforcement. Apparently, Bitcoin leaves a lot more of a trail than good old cash, the stuff that greases your average black economy. It’s unlikely that the FBI will dig all that deeply into the implications of the data they’ve seized. With a big fish like DPR to fry, a substantial cadre of agents will go into trial preparation mode, characterized by serious overtime billing. That will take the edge off any further investigation. We presume. But if you get that call from the Bureau, or someone who might be the Bureau, just remember, you can always call a lawyer first.
Top
Post Reply
1 post • Page 1 of 1